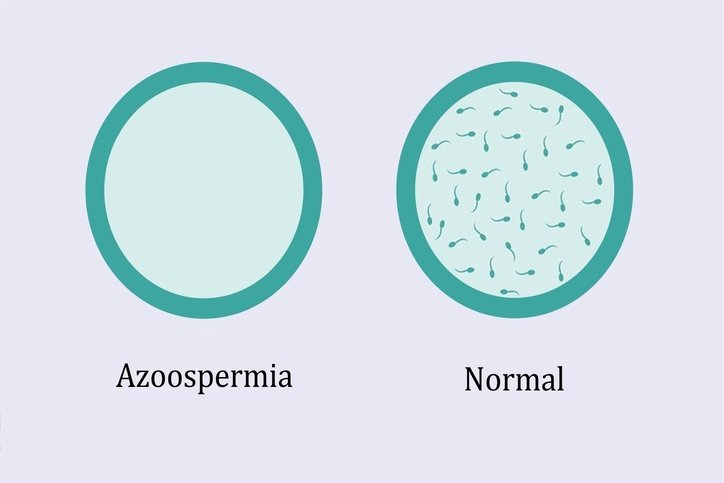 Azoospermia is a male-factor of infertility marked by a total lack of sperm in the semen. It affects about 1 percent of men and between, approximately 10 to 15 percent, infertility cases come from Azoospermia. Azoospermia is a condition in which there’s no measurable sperm in a man’s semen. How is it possible to treat such a disease? Here is a brief on its causes, effects, and possible Azoospermia treatment.

Sperm is made in the testicles and travels through the reproductive tract mixing with a fluid in the seminal ducts. Sperm and fluid then make semen, the thick, white, ejaculated fluid that comes out of the penis. Therefore, in an infertility case of Azoospermia, the sperm is abscent in the equation. You may ejaculate, but it doesn’t contain sperm. That’s why it’s common name is “no sperm count.”

Azoospermia cases, each have their own set of causes. Obstructive Azoospermia, in general, relate to a blockage along the reproductive tract. Therefore, in this case, sperm is being produced but blocked. It does not exit so measurable amount of sperm ends up in the semen. It’s typically the case with Post-testicular Azoospermia which relates to ejaculation problems due to obstructions in the reproductive tract. However, non obstructive Azoospermia simply means sperm production is either non existent or is of poor quality. This is due to defects in the structure or function of the testicles. This cause is also present in hormones responsible for creating sperm. It’s good to mention that genetic conditions also have an impact on cases of Azoospermia.

It’s possible to show no symptoms when one has Azoospermia. It shows only after medical examinations when efforts to conceive are unsuccessful. Any other signs or symptoms may be related to other causes, like hormonal imbalances or genetic conditions. Possible symptoms might include the following:

There are many ways of treating Azoospermia depending on the cause. Genetic testing and counseling are an important part of Azoospermia treatment as well. When a blockage causes Azoospermia, surgery can unblock tubes or (re)construct and (re)connect abnormal or undeveloped tubes. When low hormone production is the main cause, hormone treatments can help. Hormones include Follicle-Stimulating Hormone (FSH), Human Chorionic Gonadotropin (HCG), Clomiphene, Anastrazole and Letrozole.

If a varicocele is the cause of poor sperm production, the veins can be restored with surgery or adequate treatment. Sperm is retrievable directly from the testicle with an extensive biopsy in some cases. When living sperm is present, it is also retrievable for assisted pregnancy. Procedures such as in vitro fertilization or Intracytoplasmic sperm injection (the injection of one sperm into one egg) is a requirement. If the cause of Azoospermia is genetic, one has the obligation to avoid passing it on to your children. Your healthcare provider may recommend genetic analysis of your sperm before assisting fertilization procedures. Here are the regular ways to carry Azoospermia treatment depending on the established cause.

However, for natural alternatives, you can also consider herbal therapies that give results. Views: 4 The herbal tip we offer today helps you delay ejaculation so you can totally fulfill your partner. Around ...

Fenugreek oil to enlarge the penis

Views: 104 In Africa, there are several plants which make it possible to increase the size of the penis naturally. ...

What to do to get pregnant

Views: 3 Getting pregnant is easy. You just have to know what to do. In general, when you try to ...